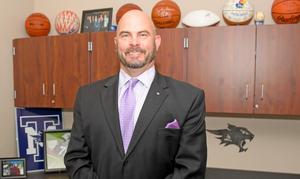 Kevin Williams has been named the new Principal of Willow Wood Junior High.

TOMBALL - Tomball ISD has announced Kevin Williams as the new Principal of Willow Wood Junior High School. He will replace Bob Frost, who transitions over to serve as Principal at Connections Academy for the 2021-22 school year.

“WWJHS has been a terrific campus for many years with high standards of success in all areas,” Williams said. “The high standards, dedicated staff, traditions, and the community support is something that interests me and has impressed me for many years. It is an honor to be a part of and have the opportunity to work alongside the staff, students and parents of WWJHS.”

Williams is no stranger to Tomball ISD, having served most recently as an Associate Principal of Operations at Tomball Memorial High School since 2016. Prior to that role, he was an Assistant Principal at Tomball High School for 10 years (2006-16).

As its new leader, he will bring invaluable experience from the secondary level to WWJHS.

Williams had his hands full at TMHS, running the day-to-day operations of approximately 200 staff members and over 2,500 students. Along with that, he served as a PLC facilitator, supervised the current construction work on campus, provided the weekly communication for the school community and implemented and supported school wide operations, which included oversight on several extracurricular activities.

What is it about education that you love so much?
“That’s a tough question. Education is probably the most important thing that impacts a student’s trajectory/path/future. It is our responsibility to serve, teach and prepare students to be the best version of themselves so they can pursue their goals/dreams and equally rewarding seeing the development when they leave us and knowing we have done everything we can to prepare them.”

What can the WWJHS school community expect of you as their leader?
“I will have a commitment and dedication to our students, staff and community to support and grow our students through their junior high years and prepare them for a successful transition to high school.”